Resources and Services
The main floor of the building houses the library's physical collection, in an open floor plan. The upper level features the children's department and the street level features the young adult, adult, and movie areas. As of May 2017, approximately 24,000 physical items are available for checkout, which encompasses print books; over twenty magazine subscriptions; three newspaper subscriptions; movies on DVD, VHS, and Blu-ray; audiobooks on compact disc, and music cd's.

An additional 30,000 ebooks and audiobooks available for download through OverDrive, to play on virtually any electronic device. Your library card allows you to access these via your account in the library catalog, or by going directly to https://nebraska.libraryreserve.com/. Ask a library staff member for details or assistance with your device. Other electronic resources include several databases where library users can access medical information, journal articles, online reference, legal information, historical records, and suggestions on what to read next.

The library has eleven public access computers available for use. Each computer is running the Windows 10 operating system and has the Microsoft Office suite available (Excel, Word, PowerPoint) for use, internet browsing capabilities, and printing.

Access your library account online Click on the Library Catalog link in the blue menu on this page, or at www.GenevaLibrary.com. In the top corner of the Library Catalog screen, use your four digit library card number and your ten digit telephone number to access your account online. Click on the My Account button. Here you can change see what items are checked out, renew items, place holds, or request the library purchase a specific title.
Organizations
The Genealogy Society of Fillmore County houses materials in the library, and holds monthly meetings the first Monday from 2 p.m. to 4 p.m.

History
The following is an excerpt from "The Fillmore County Story" edited by Wilbur G. Gaffney, copyright 1968, combined with information from the Geneva Business History Committee, and library staff.

The Geneva Public Library was originally the idea of Dr. H. L. Smith.  In June, 1897, Dr. Smith donated some 2,000 books from his personal library to the Masonic and Odd Fellows orders for public use.  These books were housed in a room on the third floor of the Masonic Temple.

The library was first placed under a board of nine trustees from the Masonic and Odd Fellows orders.  The lodges were to alternate in the majority of the board year by year.  J. M. Ward was president and W. H. Stewart was secretary of the first board.

The library was later moved to a room on the first floor of the Citizens Bank building at 9th and G Streets.  Dr. Smith granted free rent on condition that the library belong to the City of Geneva on approval of the Masons and the Odd Fellows; this approval was given.

The library was accepted by the City and on January 15, 1906, Mayor A. H. Stevens appointed the first city library board.  On November 12, 1906, the library board appointed Miss Nellie Williams, who later became the wife of W. C. Bleaven of Washington, D. C., as the first librarian at the salary of $21 per month.  She served until November, 1915, when she took position with the State Library Commission at Lincoln.

When the library was opened as a city institution on January 1, 1907, an appeal was made to residents to subscribe to magazines for the library and to donate books.  The first subscription-to the Review of Reviews for 1907- was the gift of Hon. Charles. H. Sloan.

On February 13, 1910, the Citizens Bank building burned and the library suffered a loss of $3365.40 in books, on which $2000 insurance was paid.  The library was given temporary quarters in the lecture room of the Baptist Church at 11th and G Streets.  Later the library was housed in a rear room in the Dempster Block.

In the meantime, the trustees contacted Andrew Carnegie about building a new library.  After lengthy correspondence and negotiation, a plan was approved.  Carnegie furnished $8,000 upon the assurance from the City that the tax base was sufficient to support a library of this size. Local subscriptions raised an additional $2,000 and the library building was erected.  The ground was purchased from Shumway heirs for $1,900.  The four Shumway heirs each gave $100 toward the purchase and the remainder was raised by popular subscription and a Tag Day which netted over $150.  R. W. Grant of Beatrice was the architect.  On May 7, 1912, L.L. Fisher’s bid on the construction contract was accepted.  The contract for the heating plant and hardware was awarded to Walter Spear.  Mr. G. F. Skinkle supplied the lighting system, and Mr. C. W. Hrubesky the cork floor matting.  The new library building was dedicated on January 7, 1913 with an open house from 2 to 6 p.m.  The Geneva Military Band played at 4 p.m. and at 8 p.m. a program was given in the library audience room.

Mrs. Isabel Bixby succeeded Miss Williams as librarian in 1915 and held this position for the next 33 years, during which time the Geneva Public Library grew and increased its services.  Free library privileges were procured by the citizens of Geneva township, Chelsea township, and for a time, Madison township.  In 1917, the library received the first of many bequests to a trust fund from the will of Mrs. Pierce B. Brayton, who was president of the library board from 1906 to her death in 1911.

In 1949, Mrs. T.B. Moore became acting librarian for Mrs. Bixby, who was in poor health.  In 1950, Isabel Bixby retired and Thelma J. (Mrs. Howard W.) Hamilton, who had acted as librarian from June 1950, was appointed librarian in 1951.  Mrs. Hamilton served for 37 years.  During the 1950’s, the library was modernized with new flooring, new lighting, new roof and insulation, and new air conditioning. 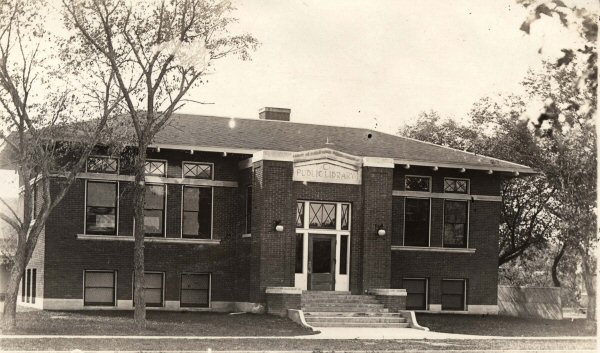 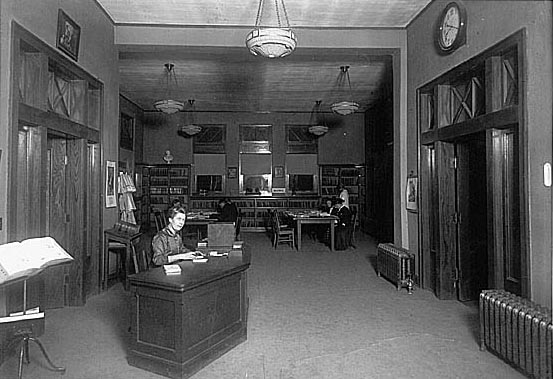 Vicki Hesson was librarian from 1987 to 1989.  In 1989, Donna (Mrs. Wayne) Shearer became librarian.  After being in existence for almost 80 years, a much larger library was needed, as well as the need to be handicapped accessible.  Maxine Nichols offered a very sizeable bequest in the memory of her husband, Robert Nichols, and this sparked a drive for an addition.  A task force consisting of Hugh and Barbara Wilkins, Cam and Pam Wilkins, Frank and Linda Heinisch, Joe Schelkopf, Kay Whitely, and Dorothy Apley was formed.  The library board, consisting of Kathryn Ashby, Marilyn Nichols, Ruth Swanson, Pat Grothe, and Judy Neemann; and the librarian, Donna Shearer, also participated in the planning.  Donations and a matching grant of $75,000 from the Peter Kiewitt Foundation accomplished the financing.  The contractor was Jensen of York and electrical work was by Geneva Electric.  The heirs of the Melvin and Nina Ralston estate had donated the land south of the library to make the addition possible.  A ramp and elevator made the building handicapped accessible.  The Blankes donated the lot to the west which was landscaped and maintained for several years by Barbara Wilkins. A groundbreaking ceremony was held in 1993, and the library was completed in 1995, almost quadrupling the size of the original building and bringing the total up to 15,200 square feet.  The addition encompassed an office, workroom, conference room, restrooms, and large collection area on the main floor, plus two meeting rooms and more restrooms on the lower levels.

Donna Shearer served as librarian for 23 years, until her sudden passing on April 18, 2013.  Molly Carbonneau served as interim director for three months until Ruth Kowalski was appointed as director.  Sarah Johnson succeeded Mrs. Kowalski on August 14, 2014.

In 2020, the roof and gutter system was completely replaced; the exterior brick of the building was washed, mortar was repaired, and caulked seams were resealed; the north entrance received a major update with a new exterior stairway, rebuilt brick kneewalls, and new sidewalks; and the Small and Large Meeting Rooms both received major technology upgrades with new televisions, projection systems, and sound systems.  These major capital improvements were possible through the generosity of the Shirley Kreutz Bennet Donor-Advised Fund through the Nebraska Community Foundation, the USDA Rural Development Community Facility Grant, and the E. Maxine Nichols Estate through the Fillmore County Foundation.